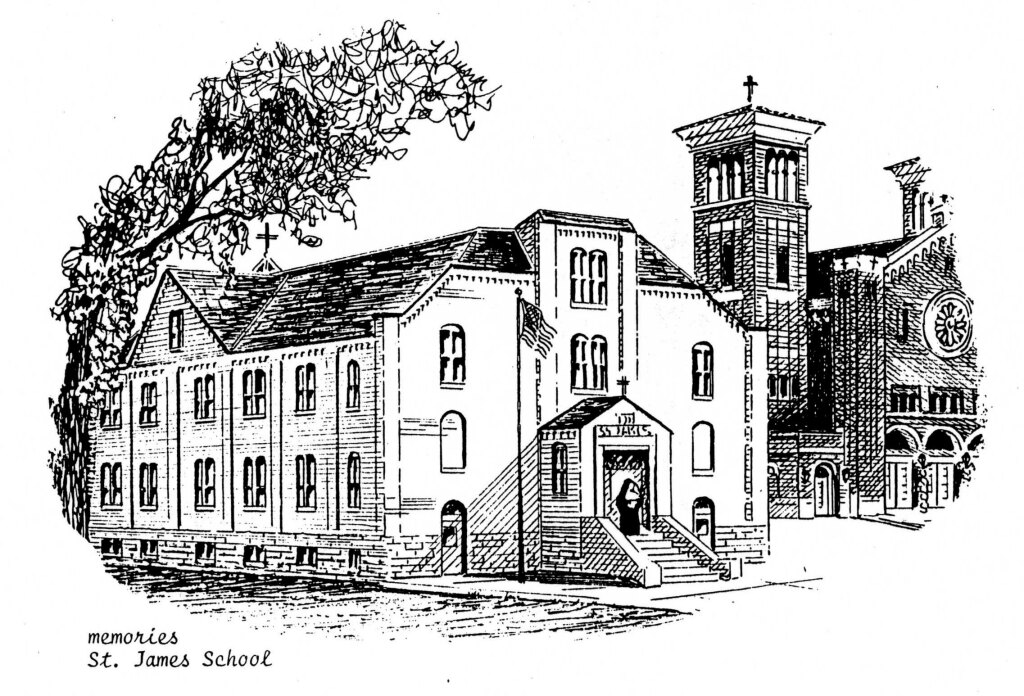 “St. James has a special place in our hearts. It means faith, family, and dear friends from generation to generation. Teaching true Christian values along with solid academic education has provided a strong foundation for our families over the decades.”

The quote, attributed to Carol Russell Marshal, could have been said by any number of multi-generational St. James School graduates. “St. James School is a family tradition for our family since its beginning,” said Carol. She and her husband Reven “Jack” Marshall attended the school in the late 1940s and early 1950s. Her mother Mary Endres Russell and her brothers and sisters went to the original school; and the Marshall children and grandchildren attended as well.

Currently, at least __ school families claim roots to the original school begun with the breaking of ground Aug. 16, 2005.  Its principal, Randy Enders, is a descendant of the first families.  His great aunt Cora Enders was a first grader in 1907 and lived until 2003, just short of turning 103.  She served as parish secretary from 19—to 19--.

The parish was started in 1905 when Holy Redeemer parish and school, located just off the Capitol Square on West Johnson Street, became too small for the large number of parishioners and children attending the school. Its pastor, the Reverend Zitterl, initiated the new parish to be located less than 1 and ½ miles away in the area called Greenbush. It was a given that a school would be included with the parish.

The Rev. Joseph Koester came as pastor of the new St. James parish in the summer of 1905 and stayed until 1921 when he left because of poor health.  A beloved pastor, he in turn loved the people he served.  In a 1913 narrative for financial report, he wrote: “Now I am proud of it that God has given in my care a parish whose members mostly belong to the common class of the people who are working hand in hand with their priest and are faithfully devoted to him.”

Land was donated by “a seemingly alert realtor,” according to the early history. “Mr. Wayne Ramsey saw here a glittering opportunity and immediately offered to donate a lot of 150x300 feet where the present church stands. This at first sight appeared as well intended and splendid gift to charity, but later Mr. James Ramsey* admitted to the first pastor that the acceptance of the site doubled the value of his extensive property holdings in the vicinity.”

The donation was accepted and within a short time $6400 was raised for the congregation. The new combination church and school was to be a solid brick building of 52 x 107 feet. The first floor was designed to be a church with a seating capacity of 475, and the school floor was to consist of four spacious classrooms.

“God Almighty and St. James meant well with us because we had the finest weather in December and January,” wrote the Reverend Joseph Koester. The whole building was finished in just over six months.

The new church and school were completed on Feb. 3, 1906, and on the following day the doors were opened for the first public services which consisted of a low Mass at 8 a.m. and a High Mass with a sermon at 10.

On the Feb. 5, 1906, St. James Church entered into an agreement with the School Sisters of Notre Dame (SSND), Milwaukee, to provide teachers for the school.  The Rev. Koester, St. James pastor, signed the agreement with Mother Marianne, Commissary General of the Congregation of the SSND.

Under the agreement, the St. James Congregation agreed to pay “each sister engaged in the school a salary of two hundred dollars per scholastic year of ten months, at six hours per day, payment to be made monthly.” The agreement further required that the parish “provide and keep in repair a suitable dwelling, furnished for the use of the sisters.”

The Community of School Sisters agreed “to supply the requisite number of teachers competent to take charge of and teach” the students.  Under the agreement, the sisters “are not to assume charge of church choir or laundry, nor of the heating or cleaning of the school; they agree merely to superintend the daily sweeping, in case it devolves on the pupils.”

The contract was binding “until the close of the scholastic year ending June 1907. Mother Marianne officially opened school Feb. 5 with 86 children present in two classrooms. Sister Consilia taught children in grades 1, 2, and 3. Sister Ludwiges taught the children in grades 4, 5, and 6.

The next year St. James school “offered a complete school of high standing and an institution of which the parish can be proud.” On June 28, 1908, eight pupils obtained their diplomas.

By 1912, the number of families had tripled, and the school could no longer accommodate the 260 children who desired admission.  At a meeting on April 12, 1912, it was unanimously decided to draw up plans for a new and permanent church.  It was initially decided to construct only the basement of the proposed church. This would provide a place for religious services with a seating capacity almost double that of the original church and for the first floor of the school building could be used for class rooms.

From 1913 until 1924, services were held in the basement of what was to rise as a permanent structure. Fr. Joseph Koester observed his 25th anniversary in the church basement.  The parish presented him with a gift of $2,000 which he immediately returned to be added to a building fund for the completed church of the future.

It wasn’t until 1923 that a new church was built, and the school took over the entire building, which was used until 1958 when it was demolished and replaced by the current building.

*James Ramsay, father of Wayne, founded the Ray-o-Vac company in 1906 and remained president until his retirement in 1934. He was graduated from the University of Wisconsin in1890. Except for 12 years in the lumbering business in Medford, he was continuously a resident of Madison. He pioneered in furthering the personal interests of his employees. His company was the first large industry to promote welfare activities for its workers. He served on the Madison Board of Education and was instrumental in promoting the erection of East High School. He was a life member of the Wisconsin State Historical Society and had a strong interest in conservation. He served many years as an elder and trustee of Christ Presbyterian Church.  (May 19, 1952, Wisconsin State Journal)